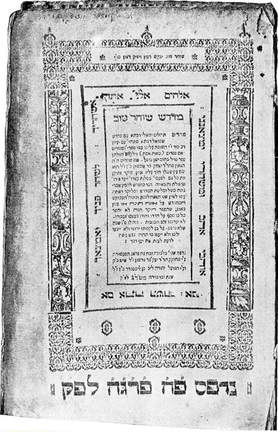 Title page of Midrash Tehillim (Prague, 1613), from the 1906 Jewish Encyclopedia.  This media file is in the public domain in the United States. This applies to U.S. works where the copyright has expired, often because its first publication occurred prior to January 1, 1923. See this page for further explanation.
The written version of the Old Testament (Torah) tells a story. What has been passed down orally for thousands of years is the backstory, the Midrash. It is rich, colorful, detailed, and compiles interesting data like who ascended to Heaven alive, who was so righteous that their bodies never decomposed, the seven things that we are not permitted to know in human form. The Midrash also reveals various mystical, hidden meanings. Furthermore, it elucidates complexities that lend themselves to a much deeper comprehension, and thus much more sensitivity with codes of behavior toward humanity and all living things. Midrash study sparks many lively discussions!

The Midrash is a fascinating exploration of nuances, a deep character study, an amalgamation of patterns where many similarities are collected and compiled. For anyone who wants a way more in-depth comprehension of what is important to G-D that is important for all of us to know, the Midrash Study is for you!